It’s no secret that everyone loves a good view. From desert views, ocean views and views across ancient archaeological sites, Jordan is certainly a destination for stunning vistas. Our top views in Jordan include a little something for everyone and are all easy to reach.

Wadi Mujib is a spellbinding canyon that towers above the Mujib River and stretches for 70 kilometers. The Mujib River in Jordan flows into the Dead Sea which is the lowest place on earth. There are many excursions that allow visitors the chance to trek through the water, beneath the towering canyons, and into the Dead Sea itself. Sections of Wadi Mujib also cover the Mujib Biosphere Reserve which is home to a number of rare wildlife species. 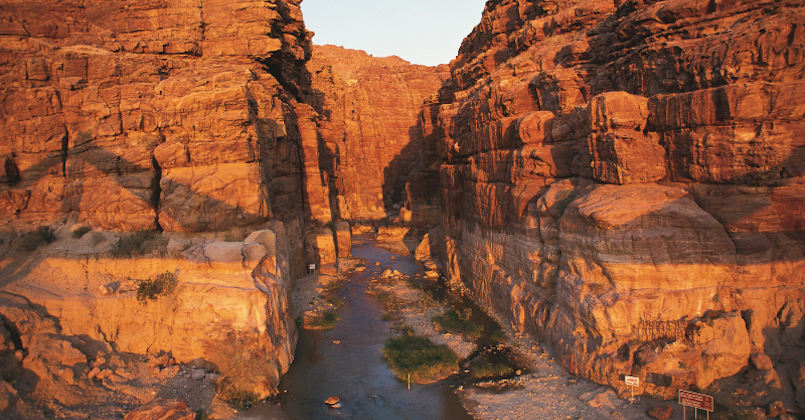 Those looking for a unique pit stop along The King’s Highway can take a break at the gorge to admire the stunning scenery. Visitors can drive along the top of the canyon to see the true scale of Wadi Mujib and there is also a look-out point that offers the best views of the river.

Wadi Rum is a valley situated in southern Jordan and it is home to a dramatic landscape and top views that have captured the hearts of artists and explorers for centuries. For those who wish to leave the city behind and escape into the wilderness, this desert destination is the place for you. Also known as the Valley of the Moon due to the beautiful night’s sky, Wadi Rum spans across 720 square kilometers of mountains, rock bridges, sand dunes, and notable sites such as the alleged house of Lawrence of Arabia. For some of the best views in Jordan climb up to the top of Burdah Rock Bridge. At 80 meters high, you’ll be rewarded with astonishing views of the desert. We recommend to take an organized tour to Wadi Rum, to make the most out of your visit.

Once ruled by the Romans as part of the Decapolis League, today Jerash is a popular city that is internationally renowned for its preservation and restoration of prominent Roman structures. Visitors can spend their days in awe of the plazas, temples, and fountains that were once at the epicenter of the Roman Empire. Jerash has gracefully updated into the 21st century with bustling markets and casual places to dine, beside the ancient city walls. At the Archaeological Site of Jerash visitors can also take in the views whilst relaxing and tucking into delicious dishes at the site’s restaurant. The restaurant is perched on the edge of a cliff and overlooks the surrounding mountainous valley. 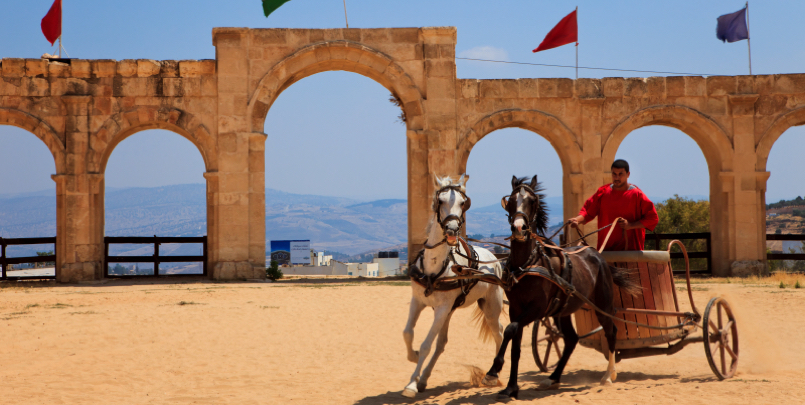 Mount Nebo is a sacred mountain in Jordan that stands almost 1,000 meters high. The base of the mountain can be reached within 15 minutes by car from the center of Madaba. From the top of the mountain, visitors can see the Dead Sea, Bethlehem, and even Jerusalem on a clear day. Mount Nebo is steeped in religious significance as it is believed to be the site that Moses stood on to view the sacred Promised Land before his death. According to the Book of Deuteronomy Moses died on Mount Nebo and was buried in Moab. Along with beautiful views, there is also a visitor’s center which contains information about the area, and the Moses Memorial Church which contains Byzantine mosaics.

The views in Jordan are certainly not limited to this selection and almost every popular landmark in the country boasts viewing points across the surrounding landscape. From Crusader Castles to astonishing valleys, there are plenty of places to admire the scenery in Jordan.