Qasr Kharana is a poignant desert castle that could easily be mistaken for a large-scale movie set. This spectacular fortress is located within Jordan’s eastern desert, surrounded by miles of deserted gravel plains. This striking structure is just one hour from the city of Amman and can be combined with a visit to Azraq Castle which is less than thirty minutes away.

There is much curiosity surrounding Qasr Kharana because although it looks like a castle, there is no evidence of it ever being able to defend its inhabitants. Unlike other defense castles, the towers are in fact solid and the arrow slits are too high to fire anything from. As a result of its unique construction, this landmark has drawn much attention to historians, and visitors travel here from across the globe every year to see this unique desert castle. 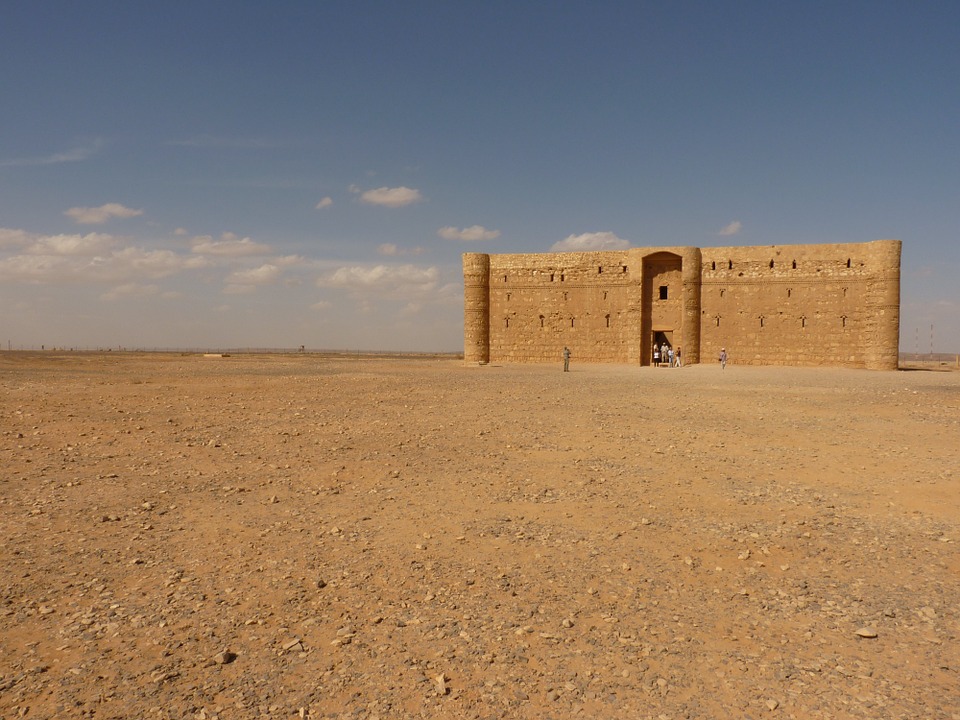 As the Qasr Kharana is not built like a normal castle, there is no evidence that it has ever been used in any battles. There is an inscription in a room of the castle which indicates that it was built in the 7th Century. Historians believe that the castle was actually used as a meeting point by the Umayyad caliphs and Bedouin leaders. The Umayyads were the first Islamic dynasty that dated from 661 until 750.

Qasr Kharana is located in the eastern desert of Jordan just one hour away from the capital city of Amman. The castle is also just a short drive from Azraq Castle which is ideal for those seeking an interesting day trip from Jordan’s capital city.

Things to See at Qasr Kharana

Though it looks large from the exterior, Qasr Kharana actually only cover 35 meters square and the rooms inside are fairly small. Just after the entrance is two small rooms which are believed to have been stables. The other rooms in the castle surround a courtyard and are divided into their own individual apartments known as a bayt.

Each bayt has a larger room with a number of smaller rooms attached to it, which was commonplace during the Umayyad period. Within the castle, there is also graffiti from the 8th century, a beautiful cross-vaulted ceiling, and a courtyard.

How to Visit Qasr Kharana

Qasr Kharana is open from 8 am until 6 pm between May and September, and until 4 pm from October to April. Entrance to the site costs 1JD (1.42 USD).

Qasr Kharana is a unique site in Jordan due to its mysterious construction. As it is only one hour away from Amman it can be easily reached as part of a day trip. Day trips can be organized through many hotels and tour offices in Amman.