One of the highlights of traveling in the Middle East region is experiencing Bedouin hospitality in Jordan. Known as “desert dwellers”, the Bedouin people are a nomadic tribe of warm, humble and welcoming people. The Bedouins are experts at adapting to life in the harsh desert conditions and living in the climate. While Bedouins are indigenous to the region, they can be found in Egypt in the Sinai desert, in the Syrian desert and in the Sahara desert, as well as the Wadi Rum Desert in Jordan. Today, there are approximately four million Bedouins who live in Jordan, as well as in neighboring Israel.

A large portion of the Jordanian population are Bedouin descendants. Not all Bedouins reside in the desert, however those that do maintain their nomadic lifestyle and inclusion of animals such as camels, goats, and sheep. Bedouins who live in the desert live in tents and they open their homes to anyone who is interested in partaking in cultural activities or enjoying authentic Bedouin hospitality in Jordan.

It can be easy to identify Bedouins based on traditional articles of clothing and garments which are worn for protection from the elements. Bedouin men traditionally dress in a white (although other colors are possible) long-sleeved garment that covers the entire body, at least passed the knees. Over this base layer, Bedouin men wear a “koufeyah”, a draped head cover that is most often red and white which is held on their head, in place with black rope or cord.
Bedouin Women traditionally wear a long dress, that it most often black and known as a “madraga”. The Bedouin head covering which must be worn is called a “usaba”.

Bedouins in Jordan are modest people, they do not carry with them many possessions other than essential items to thrive in the desert and live comfortably with nature. There is a common belief in the Bedouin culture that no traveler should be turned away, hence their welcoming attitude towards visitors and famous Bedouin hospitality. Bedouin families in Jordan will not hesitate to share their home and belongings with a visitor providing food and shelter. It is seen as an honor to host, and a large part of the Bedouin hospitality in Jordan is seen in the culture in their shared meals and their coffee traditions. 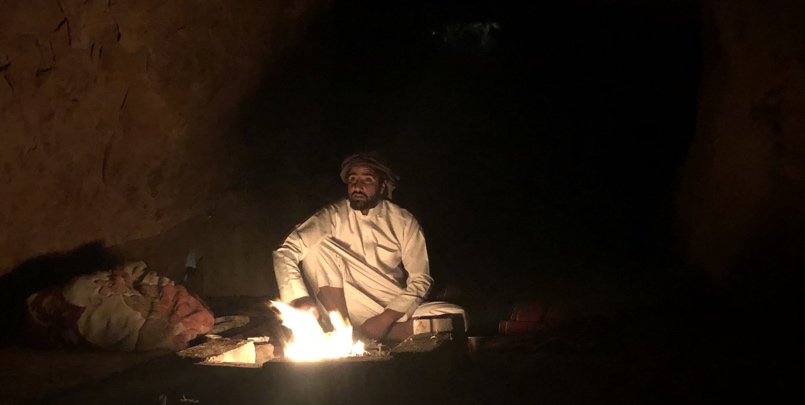 The Wadi Rum desert, a protected desert nature reserve is home to six Bedouin tribes. For travelers that are looking to enjoy authentic Bedouin experiences, there are a variety of campsites to choose from.

Campsites are authentic, traditional and inclusive, showcasing Bedouin customs and culture from the food to the coffee to a magical and memorable night under the stars. Travelers can enjoy a variety of experiences with Bedouin hospitality in Jordan with tours including the Petra and Wadi Rum 2-Day from Aqaba Tour,  Petra and Wadi Rum 2-Day from Amman or the Dead Sea tour; and the 10-Day Highlights of Israel and Jordan Tour

Another amazing and authentic experience and one of the most immersive is the Wadi Rum Ultimate Bedouin Experience Tour.